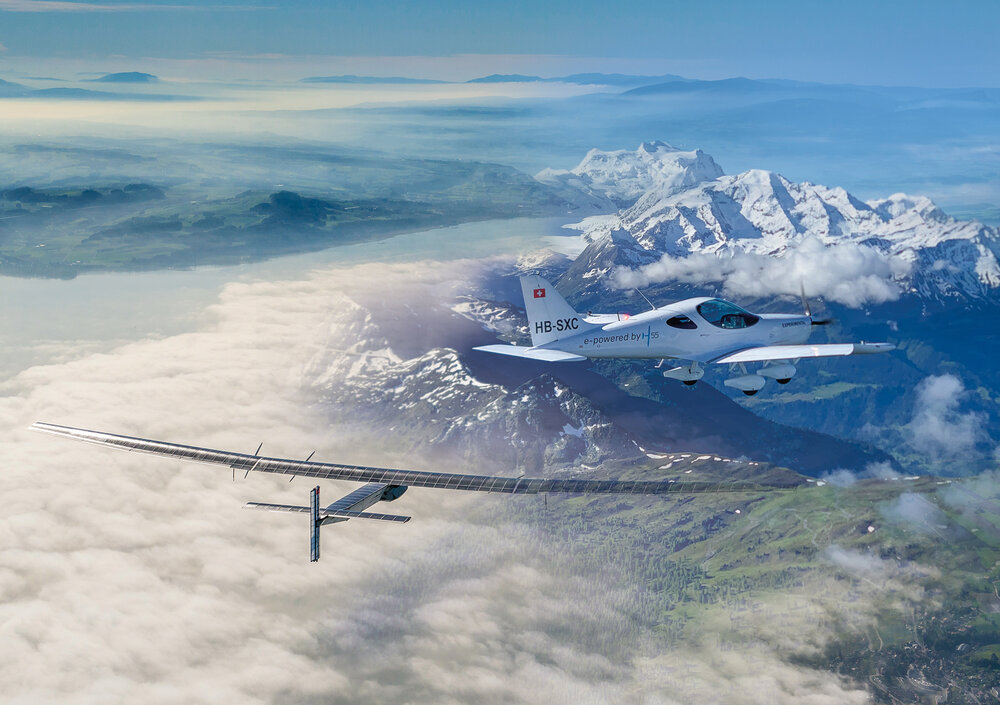 When they achieved the first solar electric flight around the world in Solar Impulse 2, Bertrand Piccard and André Borschberg had to take turns in the single-seater cockpit for weight considerations. To celebrate the 5th anniversary of their historic round-the-world voyage, Solar Impulse’s co-founders and pilots have today - for the first time - shared the cockpit of an electric airplane built for commercial applications.

The pilots took off from Sion, Switzerland, aboard the Bristell Energic, a zero-emission airplane whose propulsion and battery management systems have been developed by H55. H55 is the technological spin-off of the Solar Impulse project, established by André Borschberg and two colleagues following the round-the-world voyage. It will be commercially available in late 2022. H55’s highly clean and efficient technology is part of the first 1000 solutions that Bertrand Piccard and his Solar Impulse Foundation have certified for combining environmental protection with economic profitability.

When Solar Impulse landed in Abu Dhabi on 26 July 2016 after circumnavigating the globe, many considered it the finishing line of an ambitious project serving as a powerful symbol for the energy transition. Five years later, its co-founders show that Solar Impulse never had a finishing line and its feats go beyond symbolism. Its pioneering heritage lives on in both H55’s work in enabling clean aviation, as well as in the Solar Impulse Foundation’s mission to foster the more rapid uptake of efficient technologies.

Bertrand Piccard said: “Success is never a goal in itself; it is only a way to go further. When I landed in Abu Dhabi five years ago, I predicted that electric passenger airplanes would fly within ten years. Today’s flight in the Solar Impulse’s spin-off, the Bristell Energic powered by H55, shows that we are on track. It’s also a special emotion to share for the first time the cockpit of an electric airplane with my partner André. H55 is the perfect proof that clean and efficient technologies allow us to do so much better for the environment and all fields of the industry. And on top of that, this low-carbon flight reminded me how great it is to fly without noise! A fantastic experience. I am proud to count H55 among the solutions that the Solar Impulse Foundation has labeled for benefitting both the environment and our economy.”

André Borschberg commented: “The Bristell Energic is the first commercial step as an electric airplane following our round the world flight with Solar Impulse. Many more aircrafts will be either converted into electric airplanes or newly designed to benefit fully from the tremendous advantages of the electric propulsion technology developed by H55. In ten years, we will see the first commuter airplanes transporting passengers from cities to cities with limited noise impact and CO2 emissions.”

Images of the flight and celebrations can be found here.

The video will be available as of 16h here.

About the Solar Impulse Foundation

‍
The Solar Impulse Foundation is a non-profit organization founded by explorer and clean technology ambassador Bertrand Piccard. It is committed to identifying and promoting technological solutions that can protect the environment in a profitable way. Recently, the Foundation achieved its first goal of finding 1,000 such solutions to receive the Solar Impulse Efficient Solution Label. The labeling process is the only evaluation available today that assesses the economic profitability of products and processes that protect the environment in the fields of water, energy, mobility, infrastructure, industry and agriculture. Bertrand Piccard connects these solutions to decision-makers to help them adopt more ambitious environmental targets and energy policies.